Aria met Gabriel, who had visited the prayer room for morning prayer.

A future killer who was too faithful and will pray to God even if the sky should fall.

The reason why she was using such an analogy was because Gabriel had a face as if the sky had fallen.

‘It’s the first time I’ve seen that kind of expression.’

She didn’t know what was going on, but she was now weighed down by despair.

[You have a bad expression.]

Gabriel groaned as he patted his face.

He didn’t seem to realize that he was the type of person who showed all his emotions on his face.

It must have been that his emotions rarely changed.

“As the Grand Princess said, I think I deified the saint during that time.”

As expected, it came up.

‘Since he crossed the continent, I thought he had at least one means of contacting Veronica.’

[What did you say]

“I didn’t tell the truth.

He had been too open about it…….

She was so frustrated.

That was like bragging that there was a way to get divine power on Valentine.

‘Are you an Idiot’

She sighed as she clasped her trembling hand behind her back that had wanted to grab Gabriel’s collar.

‘You don’t have any tricks.’

Had he never lied in his life Aria thought that if it was Gabriel, he might be.

“She said that I was not the kind of person to speak nonsense, and asked if I could find a way to increase divine power.”

Hearing what he said, she had no idea why he was desperate.

“But rather than those desperately needing eyes…”

Gabriel couldn’t continue to speak and made a strange expression.

He looked full of anxiety.

Sometimes people express more with their eyes and actions than with words.

“She kept pushing me.”

Aria became desperate at the thought that her own hypothesis might indeed be true.

‘This was possible because Gabriel left Veronica as their trust was not so strong.’

But what if it was after she became a saint She couldn’t even imagine.

By then, Gabriel must have been brainwashed enough to believe the sun was rising in the west, if it were the words of the saint.

‘Then he must have thought, judged, and acted the same as he did in his past life.’

It was fortunate that Gabriel came to the Grand Duchy at this time.

‘There is no time to despair.’

She raised her head with a firm expression.

He didn’t seem to know what to do.

Aria wrote down a new card and held it out.

[Maybe the saint will come to see you soon.]

He was so surprised that he didn’t even notice that his title was changed from ‘Angel’ to ‘You’.

Does she have to”

Then, when an opportunity to increase divine power has come, will she wash her hands and stand still

‘I would have thought it was impossible unless I was born again.’

In a previous life, it was a divine power that Veronica tried to obtain by killing even a priest from the same empire.

It was necessary to pull her out of Garcia’s field of view as far as it could, and watch closely what she was up to.

Originally, enemies should be kept closer and monitored.

[It’s a secret between the two of us.]

Aria pointed to her necklace.

She had to be able to believe him.

She stared at him with wide open eyes as he spoke firmly.

He was going to keep a secret from others, but he was that naive, and it seemed he would fall over if the saint dug a trap skillfully.

She stared at him without a word.

Gabriel nodded his head reluctantly, knowing that it was his fault.

“I have a duty to guide the saint in the right path….”

– Where are you now

Gabriel’s words and Lloyd’s messages were heard mixed at the same time.

– It seems that I had to go to the Imperial Palace for a while because of the Emperor’s poor trick.

“I shouldn’t have said anything to the saint and made her take the test.

She is a kind person who always takes care of sick people, but I prompted her…”

“But she was only swayed by temptation, and she will soon recover…”

She already has sensitive senses, but when the two men spoke at the same time, her head rang.

Even Aria couldn’t understand what was being said at the same time.

Reluctantly, she raised her hand and covered Gabriel’s mouth.

Then the endless chirping of words finally stopped.

She was just wondering if Lloyd could hear anything.

Aria trembled unknowingly as the message was dripping with gloom.

At the same time, the door to the prayer room swung open.

Aria was startled, and she released her hand that was covering Gabriel’s mouth.

It felt like she was caught cheating No, why should she feel that way Aria was extremely embarrassed.

‘Actually, I was just dealing with an idiot who trusted people too much.’

But she had no excuses.

Lloyd came up to her in the blink of an eye and hid Aria behind his back.

Lloyd looked down at Gabriel with a chilling look in his eyes, and then smiled strangely.

Of course, he wasn’t smiling because it was funny.

“I should’ve taken care of it earlier.”

It was the kind of smile the devil would make when he was thinking about what to do with the worm crawling under his feet.

Aria smelled the insanity she had forgotten for a while because of the continuous peace. 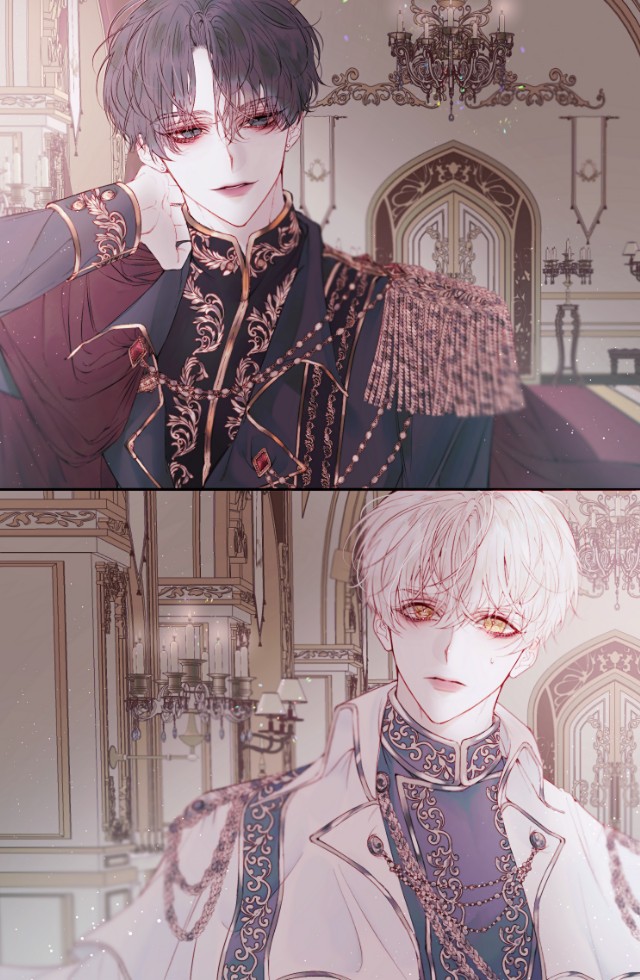 The silver-haired young man, who had been silent for a moment in the sudden situation, understood the situation belatedly and said,

“We just talked for a while.

He won’t Aria was relieved as she swept her chest inside at his answer, which sounded natural without any hesitation.

She thought that Lloyd had rushed to her and separated the two, because he thought she was having an affair().

“I just made sure of one thing.”

Lloyd cut it off as soon as Gabriel was about to say something.

And exhaling slowly, he tilted his head, and glided his fingers across the gold ornament embroidered on the collar.

It was as if he was trying to calm his messed up reason for a while.

“Your pretty eyes, it looks like you got it finally.”

He was talking about Gabriel’s eyes that had gained explosive divine power and became bright gold.

“If you’re going to be pursuing something hard….

you’d better stop and look at your future before you get in trouble.”

As Lloyd said so, his eyes didn’t smile at all, only the corners of his red lips raised.

Because he was in front of Aria, it was a refined expression.

At that moment, Gabriel gulped and almost looked at Aria without realizing it.

Using his desperate self-control, he managed to return his eyes to the original position.

“There has never been such a thing…”

It was a word mixed with deep hesitation, even for himself.

Aria read the chilling tension between the two men and shook her head.

‘How am I supposed to explain this’

Because the past and the present were so complicatedly entangled, her head was also entangled.

It was true that she had to help Gabriel on the right path so that she can avert some future catastrophe.

She really needed him to stop a saint who was going to frame her and kill her after starting a war.

‘I should explain the necklace.’

Aria raised her hand to take out the necklace hidden under her clothes.

Then, realizing her intentions, Gabriel stretched out his hand in surprise.

He desperately grabbed Aria’s hand and clinged to it.

‘Of course I did say that.’

The misunderstanding was deepening.

No matter how much it was a secret between the two of them, Lloyd was an exception in Aria’s book.

“Aren’t you going to let go of your hand”

It didn’t seem like Lloyd gave much strength, but she could hear the sound of something cracking and bone breaking.

Gabriel let out a small groan and let go of Aria’s hand in a trance.

Then he wrapped it around with the other hand.

His divine power was excellent enough to heal injuries in an instant, but it seems that his wrist was broken.